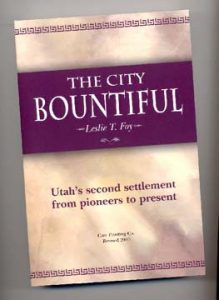 History in the making: Detailed story of Bountiful retold in the updated book.

BOUNTIFUL — Nearly 30 years to the day after Leslie T. Foy’s original history of Bountiful was printed, an updated version of the book was unveiled at a small ceremony at The Bountiful Historical Museum on Tuesday morning.

“The City Bountiful” is an extensive history of the people who settled Bountiful and those who have occupied it since it was settled. Dean Collinwood, chairman of the Bountiful Historical Commission said Foy did a fine job of including all of Bountiful’s past residents. “You took pains to include everybody in the community, not just the LDS portion of it,” Collinwood told Foy.
City Councilman Tom Tolman said the book is the best source for understanding the history of Bountiful.

Foy said all the proceeds of the book will donated to The Bountiful Historical Commission.

The commission hopes to be able to build a new museum in which there will be a humidity-controlled room that will help preserve old books, documents and photos.

Foy, who also authored another book that focuses on Utah’s history, said it is important for people to understand what happened during preceding generations.

“If I’ve learned anything over the years it is that our roots are the source of our strength,” Foy said.

While only 200 books were printed, more may be printed if there is enough demand.

Collinwood said he feels it is important for people to understand the history of the city.

“The only way we can plan for the future is to make sure in the present that it is meaningful to the next generation,” he said.
The 350-page book includes fun facts and interesting tidbits from throughout the history of Bountiful. It also includes several photos of what Bountiful used to look like.

One chapter focuses on cultural and recreational events from Bountiful in the past.

Another chapter explains the hardships the city went through during the Great Depression.

It also talks about the emergence of a more modern Bountiful in the 1940s.

The book also includes brief biographies of some of Bountiful’s more famous residents of the past.

Perrigrine Sessions, John Stoker, Anson Call and John Stahle, Jr. are all recognized as historical figures who helped shape Bountiful into the city it is today.

The book is available at Bountiful City Hall, at the Bountiful Historical Museum and at Me and My House in Bountiful.

The limited edition book is available for $25.